I don’t do posters

I don’t do posters.  I just bought this poster.  Why?  Because it is the most extraordinary (please note seamless link to hello world page) thing I have ever seen at the theatre.  The most outstanding acting by artists at the pinnacle of their profession, staged by the world’s best theatre company.  I might never see something like it ever again.  But I will keep going in the hope that I might.

The synopsis I read was a complicated stream of reality, flashbacks and plain old fantasy and I wondered if I would know what was going on – but it was handled in such a simple, elegant way that this was not a problem. The acting was so good that you thought you were observing somebody’s living room – not like in Eastenders – but in your own life.  The emotions were spot on, the words spoken like it was true dialogue.

The set was very clever, making use of the height of the stage and the way it protrudes into the audience – this was at Stratford – I am not sure how they will do it when it moves to London. 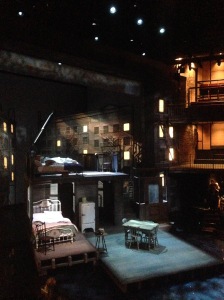 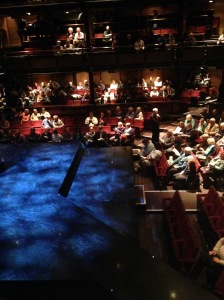 I and I think the rest of the audience too, left feeling drained but exhilarated having witnessed such excellence.  It is not a happy play, take tissues.

I then saw this at my local theatre in Milton Keynes.  Not of the same calibre but most entertaining with excellent comic timing, and for oldies like me, Jason Donovan is always a nice bonus.  I had to explain to my 15 year old daughter who he was.  She did not get any ice cream in the interval.  Ignorance is no excuse.

On the subject of food, anything that crinkles should NOT be permitted in a theatre.  There were people desperately looking for that last chocolate button, right beside my ear and I tried so hard to do THE LOOK over my shoulder in the dark, but alas, to no avail.  Embarrassed said 15 year old though, so that’s always a bonus.

Go to the theatre people.  It’s better than the telly (most of the time)