There are no words to describe how angry I am at the photograph that was taken as part of an advert for this company, which was banned in the UK today.  No, that’s not right,  there are many words:

sick (not in the urban dictionary sense, thanks very much)

irresponsible – yes again, because I cannot get over the fact that a group of people who supposedly call themselves artists thought this was not only OK, but attractive or even beautiful.  How is this image: 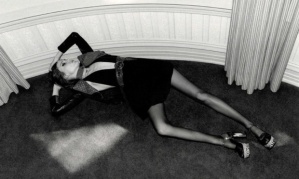 any different from this image?

The second woman is not wearing £10,000 worth of YSL clothes.  That is the difference.

Every single day I do battle with the media on behalf of my daughters.  My daughters, who are beautiful and perfectly formed.  I tell them often.  I know they don’t believe me.  They measure themselves by these standards.  These are not standards, it’s death dressed up in expensive clothes. It makes me want to cry with indignation and frustration on behalf of a generation has has no idea what is normal.  It makes me want to remove all access to the internet and magazines from my children’s lives. What the fuck are you doing?  Who thinks this is alright? And yes, this is an extreme example of utmost stupidity and lack of thought and consideration, but the rest of the social media circus and crash diet adverts, pill sales and cellulite on bikini body bashing fuels the fire.

We need to eat to be healthy.  We need to eat to protect our organs and make our brain function to the best of its ability. We have been given this body and we have a responsibility to look after it, to make the best of it, just like the rest of our lives and that does not mean starving it or aiming to achieve something that is unrealistic, downright dangerous, and just not attractive in any form.  We eat to enjoy life and be sociable, food is not just for fuel, it is part of companionship and at both your local trattoria and 3 Michelin star restaurant level, it’s art, it’s soul, it’s life, literally.

Who gives a shit about thigh gaps?  I care about the fact that when my daughters walk into a room and smile, they light it up. Simple.

And I don’t want them to make themselves unhappy, unhealthy or even worse, die, trying to achieve anything else, because that smile is all that matters.